Node PowerPoint layouts are a great comparison tool. It’s a modernized version of cluster diagrams. Rather than showing the difference node templates focuses on showing the similarities. Node designs are exemplary data analysis tool which aims in organizing objects into groups in a way that degree of association among different objects in a group are maximum and minimal when compared with other groups. Node PowerPoint templates can be an efficacious tool for competitor analysis, market analysis, pricing, product development, and so on. All these node PowerPoint templates are highly customizable; you don’t have to put much effort into customizing it as per the needs. 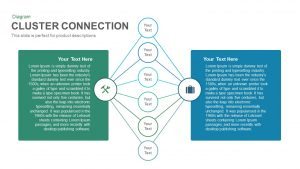