Do you want to explore features, tourist attractions, cultures of Angola country? You can do it conveniently using our Angola map PowerPoint templates. It’s a flat map design of a country in Africa. Situated on the west-coast country of south-Africa. It’s the seventh largest African country. Exploration and adventure are now the latest trends. Globally people want to explore new countries, and Africa is at the top of the list. Due to its diverse forest areas and exotic wildlife species, Africa becomes a hit tourist spot.

Our Angola PowerPoint template not only features a silhouette map of Angola country. But also, an editable map with, GPS trackers, etc. Using Angola PowerPoint maps, you can educate students about the geography of the Angola region. You can highlight the business operation in Angola and its cities. Satiate the desire of your audience using these Angola country PowerPoint Map. 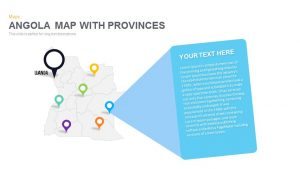